House music dj/producer and entrepreneur Ashley “Shimza” Raphala popularly known for hosting both the #LockdownHouseParty and Shimza’s One Man Show has recently announced that he will be bringing his One Man Show to our television sets on the 16th of June. 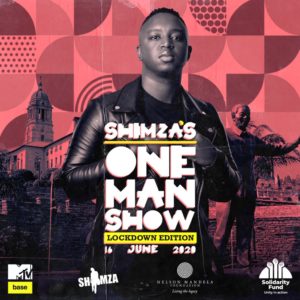 The One Man Show is normally hosted twice a year with shows in Soweto and Tembisa, Johannesburg, South Africa. This time around, the show will be brought to us live through MTV-Base as a two hour lockdown special.

16th of June, my One Man Show live on @MTVBaseAfrica from the Union Building, raising money for the Covid-19 @SolidarityRSA Fund and the @NelsonMandela foundation Each One Feed One fund ?? tune in between 18:00-20:00 on Youth Day ?? #OMSLockdown #OneManShow #June16 pic.twitter.com/W8nf0LiwKF

In partnership with MTV-Base a special broadcast will be televised live on Tuesday the 16th June 2020, to coincide with the Youth Day. Shimza’s One Man Show – The Lockdown Edition will see  Shimza playing a two hour set at the iconic Nelson Mandela Statue at the Union Buildings encouraging young people to look beyond Covid-19 and be in the forefront of reimagining a new future and creating new opportunities. Funds raised by the Shimza’s One Man Show – The Lockdown Edition will be donated to the Solidarity Fund which seeks to fight against the spread of Covid-19.