Mesuli Magubane, also known as Vesant Q who has been in the music industry for more than a decade has recently dropped a new afrotech single. The single is titled Stella Drummer and this track has some awesome and smooth build-up harmony with some hard-core drum! 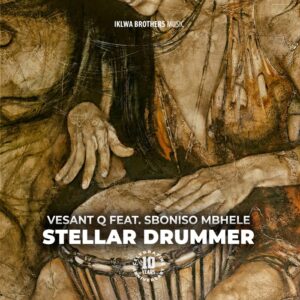 The song features Sboniso Mbhele, arguably one of the powerful vocalists in South Africa who has also worked with the likes of Zakes Bantwini. He also a member of an Afro Funk band called Soulphiatown signed under Nomedic Tribe. He has also worked on productions such as the Hugh Masikela Musical Tribute. He also produces and writes music for other artists and has recently produced music for Denmark based acapella group Baobab Sisters.

Vesant Q is an audio engineer at Iklwa Brothers Music and is the one behind mastering for almost all the song released under Iklwa Brothers Music. His sound has been supported by the likes of Culoe De Song, Dj Fresh and has also received a warm welcome abroad. He has been A resident dj of the radio show The Odessy Session Drum Radio in the UK and also at Eyadini Lounge in Durban, South Africa.