Tommy Heron Reveals Latest Release Titled ‘Because of You’

Huge Music Records amp up the vibes with a tasty debut for the label from London’s Tommy Heron. Because Of You is deep and chic with a distinct 80’s flavour, made up of lush airy synths that float over an Italo style bass and a punchy power-groove. Also on the package are remixes from Tom Chubb, who works up a feel good Nu Disco vibe, adding catchy piano hooks and a funky bass; Southside Son turns up the heat with a sublime treat for the Deep House heads; and blindB offers up a blissed-out Broken Beat remix complete with spellbinding jazzy keys and sweeping string hooks. 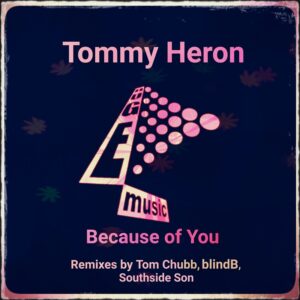 “’Because of You’ is a bit of a different vibe to what I usually produce as I got a little tired of sampling the 70s Disco records I usually use and wanted to try to create something more from scratch. I wanted to make something which had a bit of everything 80s in it; an Italo feel with some nice layered synth and a few heavily reverbed snares. I had a lot of fun making it. The remixes are bang on as well, really taking the track off in totally different directions” – Tommy Heron

Tommy Heron is a London based DJ & Producer, whose career has spanned over 21 years. There’s very little Tommy’s not seen as a DJ – from regularly playing at the legendary Turnmills, to holding an ongoing 18 year residency at the infamous London based Funk Me parties – as well as setting up his own Ibiza night with Firas from Waze & Odyssey. Tommy’s productions include numerous Top 10 Traxsource releases, landing him on labels such as Phoenix Records, Mood Funk, Pornostar and Whitebeard Records to name but a few.

Tags Because Of You Tommy Heron