Kususa & Argento Dust are an Electronic Dance Music trio from South Africa formed in 2018 by duo Kususa and Argento Dust. The trio has released a handful of productions together, which includes an EP – Incwadi Encane on a Ibiza imprint label and their well known single – Just Love which echoed in clubs and festivals worldwide, cementing the trio as one of Afro House pioneers of this time.

They have featured on notable publications such as Mixmag, Ballantine’s Stay True, RedBull ZA and different DSP playlists around the dance world. Following the success of their joint single Just Love, Kususa & Argento Dust have put their creative minds together again to curate a proudly South African independent electronic & dance music label called Back Noise Music Africa . The Afro House pioneers have teamed up for the label’s first release titled Victims of the Night. 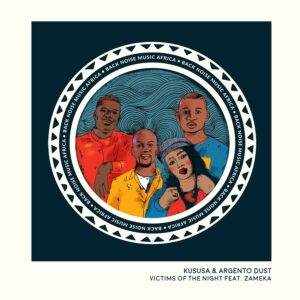 This effortlessly memorable tune encapsulates the spirit of summer through Zameka’s smooth vocals, infectious guitar melodies and a gem of a groove. This track has already enjoyed early support from Black Coffee as he’s recently returned on his European tour.