Music Is King Issues An Apology To Fans

After a successful sold out show in Johannesburg on 14 December, Music Is King took the concert series along with an explosive line up to Kwa Zulu Natal for the Durban edition on 15 December. However, Sunday morning both Fire and Safety department, event promoters and assigned Health & Safety Officer Jason Strydom from Striker Security Specialists were forced to order an emergency evacuation at Kings Park Outer Fields. The following information is quoted from their report which lead to delays and changes to the event later that day.

“It was with the consideration of all the patrons and staff safety that we had no choice but to delay the opening of the event yesterday.” – Music Is King Event Organizers

This act of nature, which was beyond organizers control, affected the overall event program and running order with artist line up. All sponsors, stakeholders and ticket buyers for the event were immediately notified of the delay. All artists who were scheduled to perform at Music Is King, Durban Edition were notified of the changes in the programme. 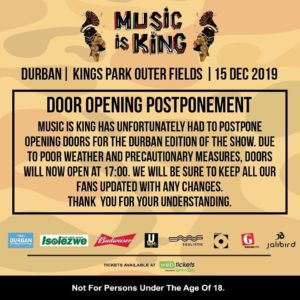 “It is really unfortunate that the weather did not permit us to bring the full Music Is King experience we had planned to Durban. The safety of patrons was our highest priority, and hence we had to wait for legal clearance before continuing with the show. We sincerely apologise to all our fans, and the involved artists who were excited to perform on this stage. My team and I are currently working tirelessly to bring back this experience as previously planned for my hometown. Thank you to all the fans, sponsors and artists that were patient through the weather and for their unwavering love and support to us and Music Is King.” – Blackcoffee (Music Is King Founder).

A Music Is King experience will be brought to the city on 22 December by Soulistic Agency, Jalibird and Durban Tourism at the Durban Music By The Sea Concert. Featured on the line-up will be Black Coffee alongside Distrution Boyz, Muzi, DJ Dee, DJ Le Soul, DJ NAG, Mário, Khumz, and Crae. All Music Is King fans are invited to experience the sea festival taking place at the Amphitheater, New Promenade.