Following their stunning joint debut If Only You Could See Me last month, Wheeler del Torro and Sidney Washington reveal their second release on Dog Day Recordings with a beautiful sun-drenched Latin house outing, Voce e Linda, remixed by the mighty Doug Gomez. Voce e Linda (which means ‘You Are Beautiful’), sees Sidney deliver a candy sweet vocal that glides over a hot bed of percussive drums, warm keys and enchanting Latin guitars.

“The inspiration for this song came from when I was in grad school where I was taking a race and democracy class with Cornel West and Roberto Unger. There was a cute girl in class that I had a crush on and I decided to ask her out, but she dissed me loud enough for the whole class to hear, that I “wasn’t her type”. It was humiliating and Cornel overheard the exchange and stood me up in front of the class… “Wheeler,” he said. “You are beautiful, don’t ever forget that. We say ‘voce e linda’ in Brazil and it means the same thing, You. Are. Beautiful.“ Ever since that day, whenever I feel anxious, stressed, or out of place, I say that phrase to myself. ‘Voce e linda’. I wrote this song response to the recent events taking place in America. It’s an anthem of pride, a reminder that we all are beautiful.” – Wheeler del Torro. 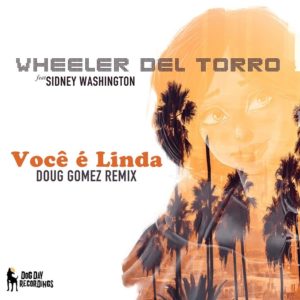 Wheeler del Torro, (aka DJ Kinfolks) is a producer, musician and DJ originally from Cuba, who has been working in the industry for the past 15 years, promoting and Djing at parties all over New York, Philly, Paris, Ibiza and beyond. He is often referred to as Tony Humphries’s musical protégé and is one of the founders of the Cultural Detectives – a historical art experiment that harnesses the power of music, bringing unheard poems and stories of slaves to life by combining them with modern music. 2020 sees the launch of his own label Dog Day Records and outlet for quality soulful and afro talent from across the globe with the first 2 releases featuring New York based vocal talent Sidney Washington on If Only You Could See Me and Voce e Linda, featuring remixes from Coflo and Doug Gomez.

New York’s Doug Gomez started his career in 1987 and as a true New Yorker of Colombian roots, his love for Afro Latin drums and sophisticated melodies led him to be embrace the path of DJing. Fast forward to present day, Doug boasts a huge music portfolio of releases on some of the best labels on the scene including MoBlack, King Street Sounds, Offering Recordings, Grooveland, Sole Channel and more, along with his own label, Merecumbe Recordings, dedicated to the soul and sound of Afro Latin rhythms. As testament to his talent, Doug was voted the #1 Afrohouse Artist by Traxsource in 2019.